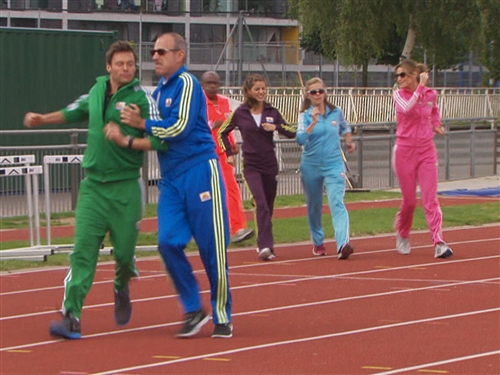 Having just come back from the Olympics, I have some fab advice to share with you even though asking me for advice in the first place is a complete fool’s errand. I am the person that walks by the croissants for about five straight minutes before not committing to one and getting hummus because that’s what I came in for in the first place. So, here is your Olympic advice! 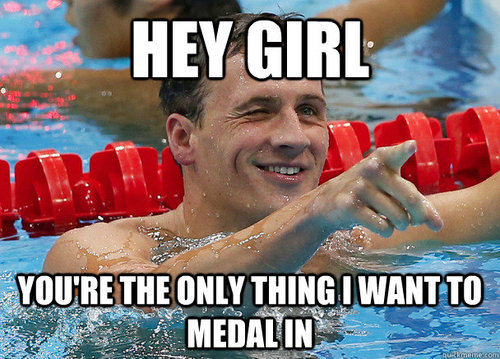 I don’t care what Ryan Lochte says. If you’re going to pee in the pool, at least don’t TELL everyone. Watching Olympians put that water in their mouths as part of their pre-race ritual was so much worse to watch after that sound-bite.

Speaking of Lochte and sound bites: If your mother says you’re only good for one-night stands…it’s over, brah. She’s stopped waving that “When will you bring home a nice girl?” flag for good. 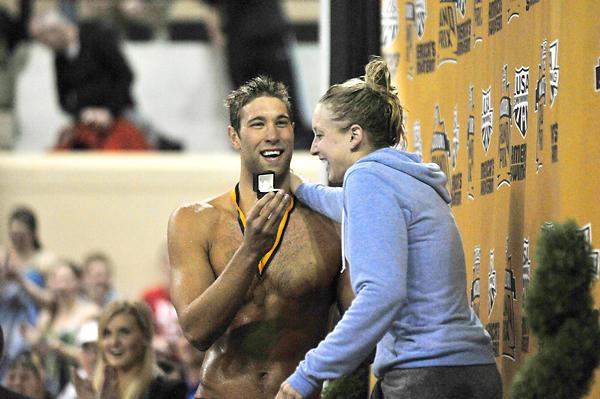 Matt Grevers and Annie Chandler (whom you might recognize from this very site!) restored my faith in amazing couples. They were so nice and sweet and in love. I can’t say any more about it because I’ll start melting into a pile of goop. Just…be them, please.

If you are rude to any part of a TV production team, every single person in the cast and crew will hear about it. Be nice and gracious to everyone, because no one is “below you” and being nice never gets old. These girls I used to live near had a poster that said, “It’s nice to be important but it’s more important to be nice.” Live that.

If you are in a foreign country and you’re out with your mates, FOR THE LOVE OF GOD MAKE SURE YOUR PASSPORT IS SECURE AND NOT ANYWHERE NEAR YOU SO YOU CAN’T LOSE IT. I almost don’t want to share this story, but here you go: I lost my passport (which was in my wallet…I know, I know) during my stay and had to go to the US Embassy to get an emergency one. I eventually found it, but I was lucky. I was also lucky that I was in such a US-friendly city. If i had been working on the Olympics in Sochi, for instance, I would have to travel to Moscow to replace that bad boy, which is a plane ride away. And what airline is ever going to let you fly without any ID? None. So I would have been BEYOND shit out of luck. Lock up your passport like it did you a felonious wrong.

Carve a moment of time when you’re in a work position like the Olympics to breathe. The days were long and the experience felt short, but every so often, I had to stop myself to look around and think, “Wow. I’m at the Olympics.” Pull a Ferris Bueller and stop to look around every once in a while. Then get back to work because you totally forgot that you left the stage manager on that cherry-picker and he needs to get down now.

Cast and Crew are your best friends. The crew of the TODAY Show are the best in the world. I’m biased, but I really do love all of them. They are all more than willing to help you out if you are able to make their job in any way easier. One of my friends wants to be a news anchor, but had zero TV on-air experience. Luckily, we were surrounded by a crew who liked us and had heard about her ambitions, so a couple of the camera and sound guys told her that if she wanted to shoot “stand-ups” (clips of her standing and reporting on nonsense that could go into her “reel”), they would be willing to take time out of their schedules to shoot them for her, for nothing. That is so cool, I can’t stand it.

Be dressed to impress every day. The day that you show up in jorts and a kind of wrinkly button down with no makeup is 100% every time the day that you are asked to go on air to show off souvenirs or the newest “Keep Calm” tee shirt. Luckily, the hair and makeup people took pity on me and I love them very much, so they transformed me from cranky airport mule to…person that could conceivably be on-camera. I’m not showing you the clip, but I will tell you that that surprise meant that every day going forward, I wore something that I wouldn’t be embarrassed to wear on the air. Which. by Murphy’s Law meant that I wasn’t asked to be on again. Classic.

Be Ryan Seacrest. Seriously, that man may not sleep or eat and is possibly sent from planet Zork to take over Earth, but he’s so organized and hard-working that I wouldn’t mind him being our alien overlord.